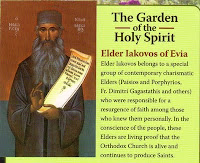 In the past few days I cannot seem to put this book down. The life of Elder Iakovos Tsalikis of Evia has inspired me more than I can express, and it's been awhile since I've come across such a book. So, if anyone out there is in search of a simple but profound life story, I highly recommend this gem, and this remarkable holy man of our time.

Some of my favorite moments from the book are during his youth, which really offer us parents much to think about. From a child, he kept the oil lamps lit in the small church of St Paraskeve each night, and chanted the hymns zealously and barefoot during the Divine Liturgies because in his times, everyone was poor, but Iakovos was even poorer.

On one occasion he and his brother were sent to take the family pig to the local butcher to provide for the family, but along the way, a jealous old man cast a demon into the pig which caused it to fall down immediately and foam at the mouth. Little Iakovos acted quickly. He ran to fill a can with water from a nearby stream, grabbed fresh basil from a garden and stopped by an icon of St Demetrios to pray and take some of the oil, then returned to the animal. He knelt down, recited a prayer, crossed the animal with the oil, and sprinkled it with the basil. After a short while, the pig got up and continued the trip (pg 26).


But this is just the beginning. With such innocence he grew in faith and ascetic struggles, truly attracting the grace of God, witnessing to those around him a life beyond this world. Upon request, the elder would carry the holy head of St David to surrounding villages to venerate. During one 5 hour walk, a treacherous storm approached and the relic was under the threat of becoming drenched. He held the relic tightly, speaking to it and hurrying his pace. Nevertheless,  not even a single rain drop came within a meter all around him. He and the holy head arrived completely dry! (pg 78)

Another time, the Elder was saved from scorpions while keeping vigil in a cave by drawing a circle around himself with a stone, and commanding these creatures not to come any closer!

The miracles and encounters with Saints during his life will catch your attention, but the personal sacrifices of Elder Iakovos will inspire you. I am certain that his example, if shared with our kids and teens, will dramatically change their lives. This book is suitable for all to read!


Here is one location to purchase the book.

Thanks for the recommendation!

My thanks as well. I'll try to put this on my Christmas list :)

Thanks for the great recommendation!


Off topic--I wanted to let you know about a "psalter group" I have started on my blog. We are breaking up the Psalter and each reading one kathisma a day. Between all of us the entire Psalter will get read each day during the Nativity fast. If you'd like to join us, the post is on my blog! :)