Upcoming Lesson for November 12 :
Turning Our Attention Towards Others for Thanksgiving this Year

St. John was born in Cyprus in the year 560. His father, whose name was Epiphanus, was the ruler of the country.When John grew up, he married and had children. But his children died. And then, when his wife also died, he was left alone and suffered very much. Then John began to direct his life more towards that of a monk. He practiced all the Christian virtues through his great love for God. St. John had a special love for all men who were poor, and for strangers. He gave them everything that they had need of! The people elected John to be the Patriarch of Alexandria during the time that Heracles was the Emperor. As a Patriarch of he Church, St. John's preaching was like a brightly burning candle, a light which shone into the world. St. John built a special hospital and house for strangers and for poor people, supporting these places from his own riches. He gave of his mercy, not only to the faithful of his flock, but also to those who were not faithful of the Church. Because of this, the people called him "The Merciful One.” 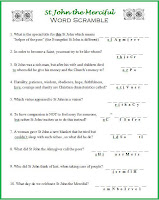 St. John lived as Patriarch until he was very old. When he died, the people whom he loved so much cried for him, and buried his body with great honor.

We celebrate his feast on November 12.

ACTIVITIES:
1. Click and Print St John's Icon to Color
2. Practice the Vocab
3. Complete the Word Scramble
4. Make a Visit to Someone in Need This Month, Consider bringing a homemade treat!

* Alms: Works of mercy or monetary gifts given to help the poor. All through the Bible, God's people are called to help those less fortunate than themselves (see Matt 25: 31-46).

* Almsgiver: A person who gives money or other donations to the poor or needy

* Charity: [a] the love of God for humanity, or a love of one's fellow human beings, [b] an act of goodwill or affection, [c] a voluntary giving of money or other help to those in need. Sharing with the poor. Often the translation of AGAPE or the love that God has for humanity. The act of love, the by product of which is material giving.

* Saint: A person who has loved God when alive, who worked at being like god, and because of his/her humility and holiness, God has set that person apart from others and works through that person still today.

* Sympathy: To share a feeling with the one who is in sorrow, sadness, suffering, has troubles.

* Vision: [a] something seen not by normal sight; [b] in a dream or supernaturally revealed as to a prophet; [c] a representation of a person or thing of a spiritual nature seen under divine influence.

May the life of St John be an example for our children and families as we celebrate Thanksgiving this year, and direct our attention towards others.

This lesson has been expanded from the Saints Alive curriculum

I like the idea of giving an American holiday an Orthodox lesson. I think that's fantastic, especially because the roots of Thanksgiving are actually quite controversial.

St. John the Almsgiver - what an inspiration. Thanks for this post. It's given me some great ideas.

I've heard someone mention the Saints Alive curriculum before. Is this available online? Can you tell me a bit about it?

Hi Arlie,
There are actually two "Saints Alive" programs that I know of...one is an interactive opportunity at http://games.goarch.org/
for kids ages 5 & up

The second is actual Orthodox lesson plans with activities published by the Greek Orthodox Metropolis of Pittsburgh. These can be used for summer camps, retreats, religious ed classes, etc.